What is Clostridium Difficile Infection? 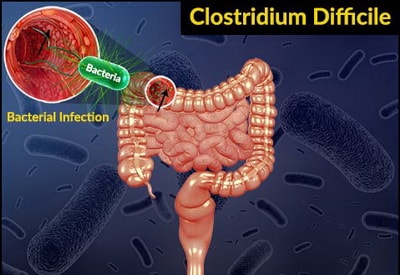 Clostridium difficile, also known as C Diff or CDF, is a Gram Positive bacterium that is known to cause very severe cases of diarrhea and other kinds of intestinal problems. The bacteria are rod-shaped and they are spore forming and anaerobic, which means that they are capable of surviving even without the presence of oxygen.

C difficile is known to be the cause the most serious cases of AAD or antibiotic-associated diarrhea – which can lead to other more serious kinds of complications such as pseudomembranous colitis or the infection of the colon. This condition is usually mediated by the use of antibiotics, which can wipe away the normal bacterial flora in the intestine, allowing C Diff to flourish.

C Diff can actually be found naturally in the body’s intestinal tract but at very small and regulated populations. Some people accidentally get them through ingestion of the bacteria or its spores. The bacterium does not normally flourish in the digestive system.

However, when the normal bacterial gut floras are killed off by the previous intake of an antibiotic, the opportunistic bacterium grows and flourishes.

Signs and Symptoms of  C Difficile

The very first signs of the disorder are flu-like symptoms. At this stage, the signs are very indefinite and misdiagnosis can be very common. However, there are also those who exhibit symptoms found in patients having inflammatory bowel disease associated colitis. Most of the time, patients who have more than 3 partially formed or watery stools within the next 24 hours and those who have had previous exposure to antibiotics are presumed to have the infection.

The bacteria can be highly transmittable when they are at their dormant stage (as spores). Spores have the ability to remain viable even when outside the human body for extended periods of time. They are also highly resistant to common cleaning methods. Because of this, many clinics and hospitals easily become common sources of the Clostridium difficile bacteria – most especially in the outpatient areas of medical facilities. To reduce the risk of infection, more thorough cleaning protocols need to be adapted.

Fortunately, there are now various methods established for proper detection of the C Diff infection in humans. One of the very first and the most common among all the diagnostic procedures is the cytotoxicity test. The test is based on the cytopathic effect of C difficile in a certain cell culture. The test makes use of toxigenic culture – where cells are cultured on a specific culture medium and are then tested for the production of toxins.

The cytotoxicity test up until today remains to be one of the best and the most accurate diagnostic tool to test the presence of C diff infection. However, this procedure can be extremely tedious and laborious as well.

Another very good diagnostic procedure used in many medical facilities today is the Toxin ELISA. It makes use of ELISA or the enzyme-linked immunosorbent assay to assess the toxicity of 2 different toxins. Most medical experts perform this test thrice before ruling out the presence of C difficile infection.

If treatment is effective, Toxin ELISA should also produce a negative effect as the bacteria are slowly eradicated from the stool.

Fortunately, it is also possible to entirely prevent a C Diff infection from ever happening. Many medical experts believe that proper antibiotic prescription plays a very important role in the prevention of the infection. Statistics have revealed that at least 50% of the antibiotic prescriptions are inappropriate and unnecessary.

Patients who are wrongly prescribed with this kind of medication become extremely vulnerable to infection. Because of this, many hospitals made it a standard procedure to test patients with C Diff infection, most especially those who are immunosuppressed or at over the age of 65.

Standard procedures used in caring for patients with C difficile infection were also tightened. Most of the hospitals now require all caregivers and medical personnel to wear gloves when in contact with infected patients. Studies have shown that this very simple precautionary measure resulted to a significant decrease of C difficile cases.

Metronidazole is highly recommended for its efficiency and price. Oral Vancomycin however, is considered as last option between the three as it can produce antibiotic resistance in most of the normal bacterial flora in the digestive system.