Home
Antibiotics For Gonorrhea Over The Counter

It is important for women to get cured of this disease before planning for pregnancy as the mother can pass this onto their babies. It has been noticed that Gonorrhea usually affects the eyes of such babies which is a dangerous proposition.

According to the Center for Disease Prevention and Control, Gonorrhea affects about 700,000 people in the United States each year and many don’t even know they have Gonorrhea initially.

Gonorrhea can be treated with inexpensive antibiotics that work very well to tone down symptoms and cure the infection. Some of the top antibiotics used to treat gonorrhea are listed below. 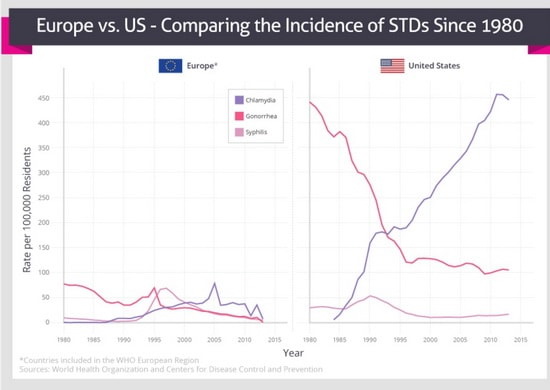 Amoxicillin sold under the trade name Amoxil is used to treat various types of bladder and sexually transmitted infections like gonorrhea. It is an antibiotic within the penicillin group of drugs. It is also used to treat ear infections. You can take the drug once every 12 hours(500mg) or as prescribed by your physician. Do not take this medication if you are allergic to penicillin. Amoxicillin is known to make birth control pills less effective, so be aware of that. Also, if you have asthma or liver diseases, then the dosage might need to be adjusted by your physician.

Side effects include itching, nausea, dizziness and in some cases diarrhea. This medication is generally safe and is used to treat children and adults alike.

Ciprofloxacin is a type of antibiotic that is used to treat various types of bacterial infections and is particularly effective in treating gonorrhea. It is sold under the brand name Cipro, Proquin and other trade names. If the patient has kidney or liver disease it is important to convey this to your doctor and he might adjust the dosage accordingly. Depending on the severity of the infection Ciprofloxacin can be taken twice a day with or without meals. Dairy products and calcium-fortified juice reduce the effect of Ciprofloxacin. Avoid taking them 2 hours before or after taking Ciprofloxacin to ensure maximum benefits. Do not take this medication if you are taking medicines containing tizanidine or are allergic to Ciprofloxacin or similar drugs like lomefloxacin, levofloxacin, ofloxacin, etc.

Side effects are similar to what most antibiotics could produce under rare conditions – diarrhea, dizziness, nausea, etc. Avoid driving immediately after taking the medicine. Also, avoid excessive caffeine as ciprofloxacin is known to increase the effects of caffeine.

Doxycycline is a very popular antibiotic used to treat various sexually transmitted diseases like gonorrhea and chlamydia. They are also very good in treating urinary tract infections, gum diseases, and acne. Doxycycline is also used in combination with other medications to treat some stubborn amoeba infections. Do not use Doxycycline if you are allergic to doxycycline or similar medications like minocycline, demeclocycline, tetracycline, etc. Pregnant women should not take this medication. Do not take this medication if you are allergic to sulfites or have asthma.

Azithromycin has revolutionized the treatment of gonorrhea and chlamydia and is probably the strongest medication with a very high cure rate. It is also quite a bit expensive compared to the other medications. Azithromycin is nowadays the preferred line of treatment in the US for gonorrhea and chlamydia infections. It is also used to treat some types of skin, respiratory and ear infections. Patients can take azithromycin capsules an hour or two before lunch. One 500mg dose per day will suffice for most and the infection should subside within 10days. Do not use this medication if you are allergic to azithromycin or similar medications like telithromycin, erythromycin, clarithromycin, etc. Azithromycin is not known to be harmful to the unborn baby, however, it is best to inform the doctor if you are planning for pregnancy. Do not consume antacids containing magnesium or aluminum around the time you take azithromycin pills. Avoid extensive exposure to the harsh sun while you are still taking azithromycin as the medicine can make your skin sensitive to sunlight.

Symptoms and Signs of Gonorrhea in men

Symptoms and Signs of Gonorrhea in women

Symptoms and Signs of Gonorrhea affecting the rectum

If Gonorrhea is left untreated it can spread into the fallopian tubes and cause PID or pelvic inflammatory disease. Now this induced PID could lead to complications like irregular menstrual periods, foul vaginal discharge along with increased risk during pregnancy. It could even lead to infertility.

Men who leave gonorrhea untreated could contract the dreaded epididymitis which affects the sperm duct located in the epididymis. Epididymitis, when aggravated, could cause infertility.

That is not all, the Neisseria gonorrhoeae bacterium can enter the bloodstream and infect other parts resulting in bouts of fever, joint pain, rashes, etc. Patients who don’t get Gonorrhea treated are at a much higher risk of contracting AIDS. Also, babies born to gonorrhea suffering mothers could contract the disease and cause blindness.

The complications can be scary, but it really is simple to treat Gonorrhea with antibiotics. These days they can be purchased discreetly online too. So please do not ignore this disease.