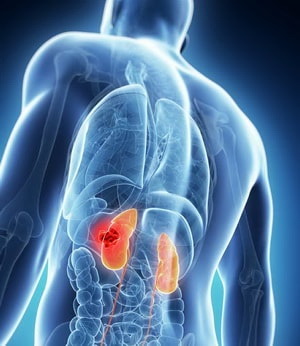 Kidney failure happens when many diseases that attack the kidneys destroy the nephrons in them by which they lose there filtering capabilities. Nephrons are sensitive and can be damaged easily, either through injury or by poisoning. However there are some kidney diseases that act gradually without sending out any warning signals and the serious damages are known in years, sometimes decades. Another characteristic of these diseases is that they attack both the kidneys together.

People with diabetes or high blood pressure are at greater risk of developing kidney diseases. Those who have a family history of both these ailments are likely to develop kidney diseases.

In diabetes, the body fails to absorb glucose, which is another form of sugar, the process of breaking glucose stops and the excess amount of glucose in the blood begins to poison the body. This damage incurred by the nephrons from undissolved glucose is known as diabetic kidney disease. By using ACE (Angiotensin-Converting Enzymes) or ARB’s (Angiotensin Receptor Blockers) which are medicines used to cure high blood pressure can decrease or delay the progression of this disease.

High blood pressure affects the blood vessels present in the kidney by damaging or destroying them due to which failure in the filtration process is experienced.

ACE and ARB’s have proven to be the most effective medication against the effects of high blood pressure to the kidneys. The National Heart, Lungs and Blood Institute (NHLBI) suggest that people suffering from diabetes or reduced kidney function should regulate there blood pressure below 130/80.

There are many diseases that accumulate under this disease category, some of them are autoimmune diseases, infection-related diseases, and sclerotic diseases. These diseases attack the glomeruli in the kidney and early signs include proteinuria, which indicates a high level of protein in the urine and hematuria, which is the excretion of blood along with urine. People may have one or both at a time. Like all other kidney diseases, blood pressure should be regulated. Glomerular diseases are often diagnosed through biopsy and treatment includes immunosuppressive drugs or steroids in specific situations and diseases. The basic aim is to decrease inflammation and proteinuria.

Kidney diseases also develop from hereditary factors, one such disease is the polycystic kidney disease (PKD). This disease is a genetic disorder in the body sometimes as early as still in the womb of the mother. In it, several small cysts develop in the kidneys and slowly begin to replace kidney mass, which in result reduces the capability to function properly and ultimately leads to kidney failure.

Autosomal Recessive PKD is referred to a rare form which is attributed to genetic kidney disorder in an unborn child. It basically disrupts the formation of nephrons and symptoms may vary from child to child. Slow growth, continuous vomiting problems, and backaches are some of the signs although many kidney diseases act silently and have absolutely no side effect for years.

Diagnosis of kidney problems in kids is possible through regular checkups. High blood pressure, reduced red blood cells, proteinuria or hematuria are first signs of kidney diseases. If any sign is visible further tests should be conducted together with blood, urine and radiology tests. In some cases also a biopsy may be needed. Initially, it was thought that these diseases were limited to adults only as symptoms appear around the age of 20 to 30. Today because of diagnostic imaging technology cysts in children can be diagnosed, which is the initial symptom in kids.

OTHER REASONS OF KIDNEY DISEASES

Direct and severe blow to the kidney, trauma, and poisoning may lead to kidney diseases. Some medicines if taken continuously for a long period of time especially over the counter medicines tend to harm the kidneys. People who use painkillers regularly should consult there doctors to confirm that no harm is imposed on the kidneys. This also includes kidney infection and people are advised to be aware of kidney infection symptoms which should be treated early.