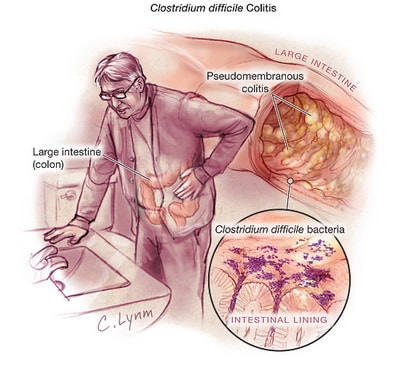 C diff symptoms appear when a person gets infected with the Clostridium difficile, which is a species of bacteria that causes several gastrointestinal diseases and also diarrhea. This unpleasant condition develops when antibiotics eliminate other, beneficial bacteria that are normally found in the gut flora.

The symptoms may differ according to the severity of the infection and the individual that got infected.

Some people who have been infected with c. diff do not show any particular signs of being sick right away – it is common for the signs and symptoms of the disease to remain latent for many weeks, sometimes even for a few months.

In this latent stage, c diff symptoms can often imitate the symptoms of the common flu, an aspect that leads to misdiagnosis in many cases. To prevent this error from happening, the symptoms have to be monitored carefully, especially in those individuals that have undergone an intense antibiotic treatment or in those who have had a prolonged stay in hospitals or other public health facilities and have complained of diarrhea.

For a more precise diagnosis, several tests must be performed in order to determine the presence of the c diff bacteria in the organism and the degree of the infection.

The most common method is to request a stool test from the patient in order to detect the specific toxins associated with the presence of the c diff bacteria.

Some of the most widely used tests are the enzyme immunoassay (EIA) and tissue culture assay. Another way of detecting the c diff infection is by performing a colon examination, which entails inserting a small tube equipped with a camera on one end into the lower colon, in order to detect inflammation. In certain severe cases, where associated complications are suspected, a computerized tomography (CT) may be performed.

This test helps to detect the level of thickening on the colon wall, a condition often associated with pseudomembranous colitis.

The degree of infection may differ according to how much the disease has progressed. In a mild to moderate stage, the main c diff symptoms are:

If left untreated, these c diff symptoms can escalate into a severe infection. In this case, it is indicated to seek urgent medical help, as the symptoms are not only very unpleasant, but they are also potentially life-threatening.

The symptoms of a severe c diff infection often include the appearance of severe diarrhea, meaning the production of 10 to 15 watery stools in the course of a single day.

This may sometimes be associated with the presence of blood or pus and a foul odor of the stool. This then leads to dehydration and severe abdominal cramping followed by acute pain in the region, due to the effort put into the bowel movements. Other severe c diff symptoms are the loss of appetite and associated weight loss.

In extreme cases, a c diff infection can lead toward the inflammation of the colon, also called colitis. Clostridium difficile is also the main cause of pseudomembranous colitis, causing the formation of bleeding raw patches on the colon, which may form pus.

In the event that c diff symptoms are observed, then it is strongly advised to turn to a medical specialist for proper diagnosis and subsequent treatment.