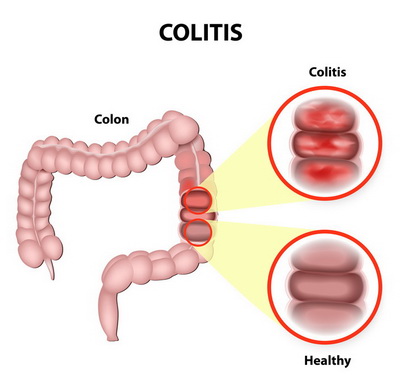 There are many types of colitis, and colitis causes may differ from one to the other. In the following article, we will analyze the different types and see what can trigger these inflammations of the colon.

First of all, there is the autoimmune range of colitis. This includes two types, from the group of inflammatory bowel diseases (IBD), which are chronic: the ulcerative colitis and Crohn’s disease. Specialists are yet to discover the causes of IBD. The unknown factor (or range of factors) causes the immune system of the human body to produce an inflammatory reaction, which develops uncontrolled.

Specialists have come to the conclusion that there is a genetic predisposition to inflammatory bowel diseases.

However, the causes that trigger the process are not 100% clear, even if some theories have been offered by the academic community.

A more idiopathic colitis is the microscopic one, which can only be diagnosed after microscopic examination of the tissue. There are two types: the lymphocytic colitis and the collagenous one. This group, too, has unclear triggers.

For the lymphocytic colitis, some specialists have reported that the use of non-steroidal anti-inflammatory drugs (NSAIDs) and some anti depressants can be implicated. Overactive immune responses are also suspected as colitis causes, but there is no definite answer.

For the collagenous colitis, aside NSAID and depression treatments, smoking has been found to be a risk factor.

Thirdly, we have the iatrogenic class. For the two different types in this category – diversion colitis and chemical colitis – the causes are different. Diversion colitis is a complication of ileostomy or colostomy, two types of surgery, and it usually occurs within a year of the chirurgical intervention.

Chemical colitis is caused by harsh chemicals introduced to the colon, by a soap enema, other enema types or by other procedures. Chemical colitis can sometimes trigger one of the two types of IBD.

In conditions triggered by infections, the colitis causes are clear: enterohemorrhagic colitis can be caused by a certain type of toxins that come along with infections. Parasitic infections, like the one caused by Entamoeba histolytica, can also be a triggering factor. Most of the viral and bacteria related infections are food-borne illnesses.

Here are some of the common bacterial colitis causes: Shigella, E Coli, Salmonella and Campylobacter. In these cases, serious dehydration may appear.

Pseudomembranous colitis appears because of the C. difficile bacteria. The C. difficile generates a toxin that leads to heavy diarrhea. This condition may appear in patients that have used strong antibiotics.

An ischemic colitis has to do with blood vessels. Due to atherosclerosis, these vessels can become narrow. When this happens to the colon, the blood supply suffers and the inflammation appears. Also, the colon can lose its supply because of mechanical reasons, like a hernia or volvulus.

Whether the causes of your colitis are traceable or not, the most important thing is to receive an exact diagnosis and to start an effective treatment, in order to avoid surgical procedures.

Colitis causes, as you have seen, are quite a handful, even if we do not know all of them, and the more exact the diagnosis is, the easier you can find out what triggered the condition and treat it.

If you believe you are experiencing colitis symptoms, then you will find this article helpful. In medicine, colitis describes an inflammation of the colon. Colitis can be the result of a handful of things, like blood supply problems, infections, and autoimmune problems.

The colon (also referred to as the large intestine or the large bowel) is the final element of the digestive system. The job of the colon is to store the collected waste that results from the digestive process. Colitis symptoms appear when the mucosal layer of the colon suffers an inflammation.

The symptoms vary to a great extent, depending on the seriousness of the inflammation.

Some of the first Colitis Symptoms that appear are:

Afterwards, pains and abdominal distress occur, usually associated with definite nausea and, possibly, vomiting. Another sign that appears most of the times in this stage of the condition is diarrhea. This is a clear sign that the colon is irritated. Because of repetitive traumatic pressure (due to spasms), small blood vessels are damaged and bleeding occurs. When this happens in addition to all the other colitis symptoms, it is high time you saw a doctor and commenced treatment. When the condition has completely set in, the number of bowel movements caused by diarrhea varies from a tolerable two to a completely exhausting twenty per day.

One of the most general sensations that colitis generates is a continual feeling that something is going on in the abdominal area. Ranging from very feeble aches to severe colic-like pains, these sensations pretty much alternate. Very often, the most severe pains occur after eating, which sometimes makes us believe that we are facing an ulcer. These two conditions rarely manifest themselves at the same time, but one does not exclude the other.

Pain during the bowel movements may occur, and these are smaller in size. Sometimes, this pain can last for hours afterward, giving the patient a sensation of extreme tiredness. These colitis symptoms appear later on when the inflammation starts becoming more and more serious.

The stools are altered, too, as mucus can be observed after defecation. The percentage of mucus is variable. Sometimes, the whole stool can be only mucus. Even if patients tend to panic because of this, despite its aesthetically shocking appearance, it is not the most worrisome symptom and it does not imply a highly risky condition. More worrisome should be the loss of blood, as this brings a much more important lack of stability for the organism. The shades of red of the blood can sometimes be darker than usual.

In the case of any potential medical condition, anyone should remember this – if the condition always involves a certain symptom, it does not mean that the symptom clearly indicates that particular infection or disease. More exactly, diarrhea does not always imply colitis. However, if these colitis symptoms occur, even if you may suffer from something else, it is highly advisable to see a doctor.